The Deed Has Been Done

I can’t believe I made it this far without quitting school already but I did it. I am officially a high school graduate and I could not be more excited. There was not a day that went by during my entire academic career so far that I didn’t fantasize about jumping out the window in every single class. That being said, I always was  a pretty good student and it wasn’t that it was hard or anything, I just hate how school is set up. 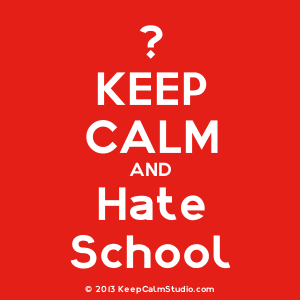 We are forced to wake up at ungoldly hours 5 days a week and sit in classrooms with hundreds of different kids every day that I have no interest in getting to know or hang out with. I really think I would have loved being home schooled. Seriously what is there not to love about it? You pretty much get to wake up when you want, or at least when your parents or “teacher” want you to. Granted, I don’t think my mom would have gone for me waking up at noon and starting class at 1pm every day, But I sure as hell wouldn’t be waking up at 6am every day, that is for sure.

I don’t know if my mom would really be cut out to be a teacher the more I think about it though. Don’t get me wrong, I love my mom more than anyone in the world but she isn’t exactly the brightest when it comes to “book smarts” and probably shouldn’t be in charge of managing anyone’s educational future, let alone her own pride and joy’s.

Now when I really think about it, home schooling probably would have been a terrible idea. Neither of my parents went to college but for some reason are giving me absolutely no choice on whether or not I want to. It was pretty much decided from the moment I was born that I was going to be going to college and that was that.

My dad works his butt off every day and has always had at least 2 jobs for my entire life. Right now he is working for a tree service company and also flips houses with my uncle. The market kind of sucks now so he isn’t doing the flipping as often but still tries to make it work. He’s always worked labor jobs and I could never see him sitting behind a desk every day punching in numbers and wearing a suit and tie to work. The thought of that is just hilarious.

My mom works as a nanny for a friend of a friend’s family and has always worked as one for a family when I was growing up. She’s great with kids but not so much with teaching them.

But all of this wondering what could have been is in the past now and the real fun begins… At least that’s what everyone keeps telling me.

Am i Going To Be Cut Out For This?

I can’t imagine that anyone really enjoys school but apparently they do and it’s starting to worry me. If i have always hated school so much, what’s to say that I won’t hate college any less?

What if I can’t do it? What if I’m not smart enough? What if i embarrass my family and get expelled???? Alright not too worried about that last one but you get what I’m saying.

Most people that I have talked to about this keep trying to tell me that college isn’t anything like high school and that it’s about to be the absolute greatest 4 years of my life.